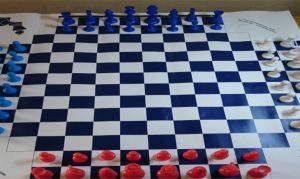 These chess sets are a fun way of playing chess, especially amongst families and friends.

Good news for Moms and Dads: a 4-player chess set keeps cell phones and tablets out of reach for a while!

In a 4-player game the players apply the same basic chess rules as in a normal game. Though there are many variants of 4-player games we’ll give you an example of the basic rules where 4 players play against one another (as individuals, not as teams):

PS: When playing as teams (a team consists of 2 players) the checkmated King can be relieved by the captured player’s teammate – the player who was captured can then return to the game again! Teammates cannot capture one another’s pieces! If one of your team mate’s pawns block one of your pawns, you can change their places – this completes your move! As teams, the team who scores 2 wins or 1 win and a draw is the winner!

Players can design their own rules – the rules can be normal, outrageous or bizarre! However, keep the KISS principle in mind when designing the rules (“keep it simple, stupid” – do not make the rules too complicated).

The main goal is not only checkmate, but also to make each 4-player game a fun and enjoyable way of playing chess!

A chess set in every classroom in every school in every community!