PS: During a chess game both players notate their moves on a notation pad or chess recording sheet (score sheet) or electronic chess score pad (check with the Tournament Director of a tournament before using it!). 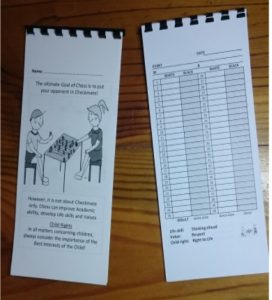 What do you need to know about notation?

The coordinates identify each square on the chessboard. Each square is a combination of a file and a rank (eg. a3 – the file is ‘a’ and the rank is ‘3’).

The major pieces are indicated by upper case letters:

Please answer all questions. Some questions have multiple answers.

You have already completed the quiz before. Hence you can not start it again.

You have to finish following quiz, to start this quiz:

Castling is a special way of moving the King and the Rook simultaneously. The King moves 2 squares towards one of the rooks (King side or Queen side). The Rook moves to the square next to the King. Castling is done to bring the Rook out of its corner so that it can be more active in the game (Rooks work best on open files, especially on the d-file and the e-file). Castling also provides the King with extra protection. Castling has a dual purpose En passant is the French meaning for “in passing“. When you move one of your pawns two squares from its starting position and it passes a pawn of your opponent this pawn can now capture your pawn as if it had only moved one square, eg. white’s pawn on c2 moves to c4 passing black’s pawn on d4. Black’s pawn on d4 (file of departure) can now capture (x) white’s pawn on c3 (the destination square) as if it had only moved one square (d x c3 e.p.).

Examples: In diagrams 4, 5 and 6 the pawn on square a2 (g7) moves two squares to square a4 (g5) so that it is next to the opponent’s pawn. The pawn on square b4 (h5) may now capture White’s (Black’s) pawn as if it stood on a3 (g6). The en passant capture allows you to capture your opponent’s pawn as if the pawn only moved one square! This action must be executed immediately – you cannot make a another move and then return to en passant! You can only execute en passant on your opponent’s side of the board! How do you notate?

When you play in a big chess tournament (at provincial and national levels) it is the rule that you notate (write) every chess move (both players also notate each other’s moves).

The major pieces, King, Queen, Bishop, Knight and Rook, are indicated by an uppercase letter (K, Q, B, N, R) and the coordinate of the destination square, eg. the Rook on a1 moves to c1 notated as Rc1. PS: Pay special attention when notating the Knight (N not K)!

Let’s work through a short example how to notate:

PS: Both players notate both scores on their notation sheets! 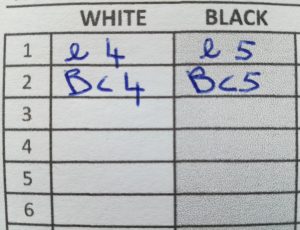 White moves his Queen to h5. Black moves her Knight to f6. 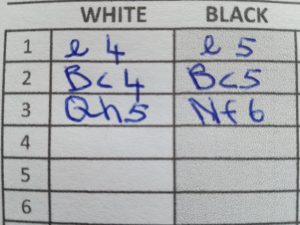 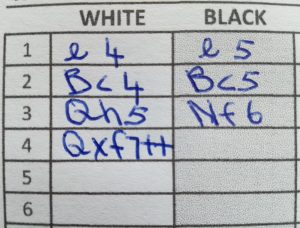 PS: Once the King is in checkmate the game is over! Some games only last a few moves (eg. Fool’s mate and Scholar’s mate), others games can last 30, 50, 80 or even more moves!

PS: Notation helps you to read chess books and study the chess games you have played against opponents.

Please answer all questions. Some questions may have more than one answer.

You have already completed the quiz before. Hence you can not start it again.

You have to finish following quiz, to start this quiz: